I wasn’t exactly sure. So my first order of business was to make waffles from scratch. Waffles are the answer to everything, right?

In 2013, I joined the ACFW and found my kindred spirits, brilliant flecks of glitter in all shapes and colors reflecting the same Light.

The only post-college job I’ve ever had was outsourced in May. And that was just one of the variables in my life that changed in ways I never could have prepared for.

But God has a way of showing that we were never really in control to begin with, doesn’t He? That we can feel safe no matter what happens.

My prayer for 2013 was the song “Nothing Holding Me Back” by Bryan and Katie Torwalt, the major theme of which is letting go of everything that holds you back from Jesus. But, related, the bridge is the simple refrain:

“Jesus, You make all things new”

Though I was far from perfect in the surrender department, those words resonated deeply with me this year. I experienced the death of a part of me, the part that was willing to settle for less and disguise subpar ambitions as my deepest dreams. Something beautiful grew in its place thanks to the encouragement of my God and my people.

Even though I’m over the moon about winning Genesis and signing with my top choice of agent, I still consider the biggest victory of 2013 to be pressing send on the application to join ACFW. And especially the little button that sent my manuscript off to the Genesis contest fairies. Because I almost didn’t.

Those little clicks launched a thousand braveries.  I learned what God can do in the business of my deepest dreams, and I can’t wait to see what other areas of my life He wants to transform.  I was like those early explorers, afraid of falling off the edge of a flat and finite map. But my life, like the world, is dimensional. The sphere of possibilities is endless. What this looks like remains to be seen. And I kind of like it that way.

This year, my One Word is: 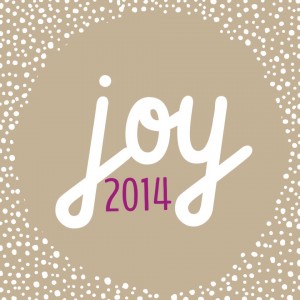 I’m greeting 2014 with a goofy smile and a big hug. I have no idea what it will look like, but my primary, overarching prayer is to rehabilitate my joy and restore it in everything I do.

Do you have a One Word or any big resolutions for 2014? Any big events to look forward to?